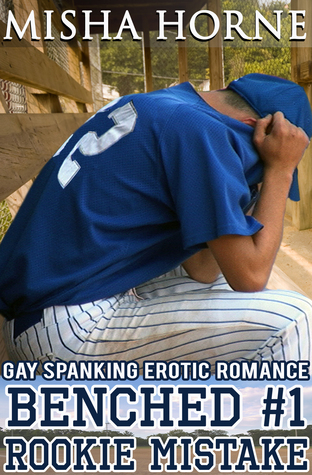 Kyle Kelley is a center fielder with an ego as big as his potential. He’s always been the star of his team, the star of his school, the star of his town. But he’s finding out college is different.Coach Mackey is gorgeous, but wow, what a jerk. He doesn’t seem to appreciate just how lucky he is to have someone like Kyle on his team. He accuses him of slacking off at practice, expects him to follow every stupid rule, and benches him during a game, just for mouthing off.When his teammates warn him the coach has an interesting way of disciplining rookies with bad attitudes, Kyle thinks it sounds too good to be true.

Until Mackey calls him into his office and gives him a choice. He can get cut from the team, or he can learn to behave. The old fashioned way.This 8500 word M/M story includes college baseball, locker rooms, sexual situations, and an over the knee spanking of an arrogant ballplayer by his no-nonsense coach.Rookie Mistake is the first book in the BENCHED series.Look for BENCHED #2: Double Play in July, 2014!(This is a stand alone story and does NOT end with a cliffhanger.)