The Book of Things Aleš Šteger 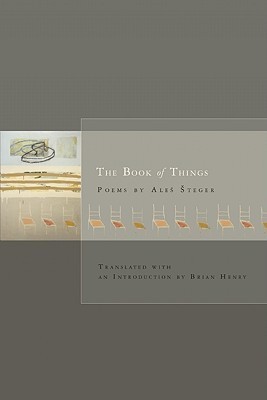 The Book of Things is Štegers most widely praised book of poetry and his first American collection. The book consists of fifty poems that look at things (i.e. aspirin, chair, cork) which are transformed by Štegers unique poetic alchemy.Translator Brian Henry is a distinguished poet, translator, editor, and critic.From Publisher’s Weekly:Steger’s efforts sometimes bring to mind such Western European figures as Francis Ponge and Craig Raine, who also sought to make household things look new and strange.

Yet Steger brings a melancholy Central European sense of history- his objects tend to remember, or cause, great pain: “It pours, this poisonous, sweet force,” Steger writes of “Saliva,” “Between teeth, when you spit your own little genocide.” (Nov.)From Guernica, a Magazine of Art and Politics:It is a rare treat to have an English translation before the ink has dried on the original. By which I mean, a mere five years after the book’s Slovenian publication, Brian Henry has brought these poems to life for those of us not lucky enough to read Slovenian.

Comments
Comments for "The Book of Things":