Render to Caesar: Jesus, the Early Church, and the Roman Superpower Christopher Bryan 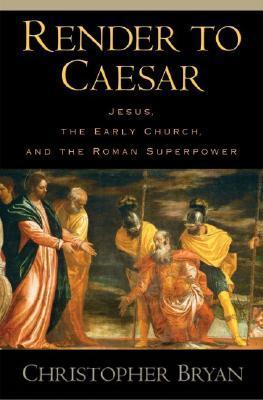 How did Rome look from the viewpoint of an ordinary Galilean in the first century of the Christian era? What should this mean for our own understanding of and relationship to Jesus of Nazareth? In the past, Jesus was often depoliticized, treated as a religious teacher imparting timeless truths for all people. Now, however, many scholars see Jesus as a political leader whose goal was independence from Roman rule so that the people could renew their traditional way of life under the rule of God.

In Render to Caesar, Christopher Bryan reexamines the attitude of the early Church toward imperial Rome. Choosing a middle road, he asserts that Jesus and the early Christians did indeed have a critique of the Roman superpower -- a critique that was broadly in line with the entire biblical and prophetic tradition. One cannot worship the biblical God, the God of Israel, he argues, and not be concerned about justice in the here and now. On the other hand, the biblical tradition does not challenge human power structures by attempting to dismantle them or replace them with other power structures.

Instead, Jesus message consistently confronts such structures with the truth about their origin and purpose. Their origin is that God permits them. Their purpose is to promote Gods peace and justice. Power is understood as a gift from God, a gift that it is to be used to serve Gods will and a gift that can be taken away by God when misused. Render to Caesar transforms our understanding of early Christians and their relationship to Rome and demonstrates how Jesus teaching continues to challenge those who live under structures of government quite different from those that would have been envisaged by the authors of the New Testament.

Comments
Comments for "Render to Caesar: Jesus, the Early Church, and the Roman Superpower":