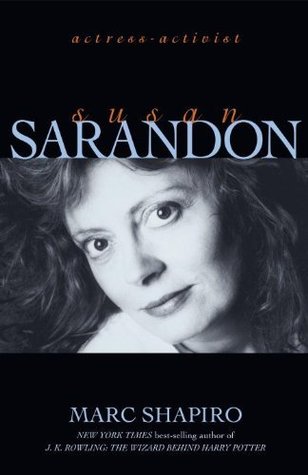 This first biography of Susan Sarandon highlights the real person behind the screen image, exploring her idealism, values, and combative spirit in the service of higher goals, while also celebrating her stunning film career.Renowned celebrity biographer Marc Shapiro traces Sarandonfs life from her strict Catholic upbringing in suburbia and her early days of protest in high school for civil rights and against the Viet Nam War to her more recent involvement with women and childrenfs rights in Nicaragua, the AIDS quilt project, ACT UP, the disruption of an Academy Awards ceremony to protest the internment of Haitians with HIV, and many other ongoing projects.

Shapiro also discusses her first career successes through high-profile roles in The Rocky Horror Picture Show, Pretty Baby, Atlantic City, and Thelma and Louise, as well as her openly unconventional relationships with directors Louis Malle and Franco Amuri, and actor Tim Robbins.So motivated is Sarandon by her convictions that she often chooses roles to reflect larger issues. She agreed to play in the film Dry White Season to draw attention to the evils of apartheid, and her opposition to the death penalty resulted in her Academy Award-winning performance in Dead Men Walking.

Over the years she has paid a price for her activist positions, and supposedly she has accumulated a sizable FBI file. Nonetheless, she has proved time and again that she is always ready to speak out and act up whenever she believes it will do some good.No ordinary biography, Susan Sarandon is a captivating page-turner about a sexy, alluring, and passionately committed actress who has broken every conventional rule.