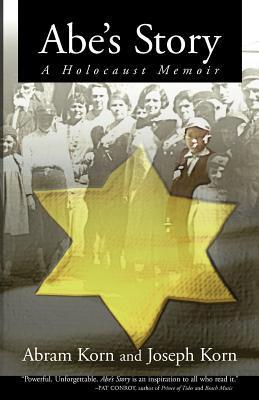 Astonishingly, Abe kept his sense of human dignity- with gangrenous feet he struggled to stay on the healthy workers list- with scan supplies he bargained for food and coal and helped others survive. Abe never gave up hope. He always believed he could live one more day, and on April 11, 1945, when Buchenwald was liberated, Abe was finally free.

After Liberation, Abe focused on going to school and earning a living. Eventually, as a man earnest to forgive past sins and take individuals at face value, he married a German Lutheran, who later converted to Judaism. They moved to the United States, where Abe had a remarkably successful business.

Abram Korn died in 1972. Abe left the rough draft of a manuscript of his story. Twenty years after his death, Abes son, Joey began completing his fathers story and the First Edition of Abes Story was published by Longstreet Press on April 11th, 1995, the fiftieth anniversary of Abes liberation. The current edition is published by Sugarcreek Press. To the family he raised proudly in the Jewish tradition, Abe left a legacy of powerful inspiration. For modern-day readers seeking the best in Holocaust literature and riveting drama, Abes Story is an incredible story of hope, of the human potential to do good in the face of horrible evil.

- Pat Conroy, author of Prince of Tides and Beach Music. An extraordinary memoir by an Auschwitz survivor, whose son rescued the manuscript from oblivion. - John Stoessinger, Trinity University, author of Might of Nations and Why Nations Go to War.