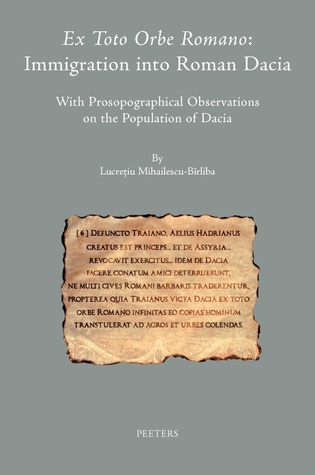 The approach is both epigraphic and archaeological, but from both points of view, questions remain without a (precise) answer. The list of persons who are mentioned in inscriptions is divided into three main categories: the elites, the mining population (very particular in relation to the whole population), and persons belonging to middle and lower classes.

The sample does not include elements of the non-stable population, such as active soldiers or members of the Roman administration in the province. In many cases, the names of people in the epigraphic sources do not indicate the origin of such persons, and only a few natives are attested. On the other hand, archaeological evidence indicates the presence in Dacia of some stone-workers from other provinces or circulating there in consequence of various wars, although it is impossible to be precise about the circulation of the latter folk.

In the end, one of the main questions is: where are the natives? In both epigraphic and archaeological sources their presence is weakly attested. The author accepts that the colonisation of Dacia was indeed intense and that Eutropius affirmation could be true- on the other hand, combining some literary evidence with the results of the present analysis and with the authors earlier demographic research, it can be said that the Romans found Dacia to be a sparsely populated territory. This is why the colonisation was not only intense but had such a strong effect in the Romanisation of the province.

Comments
Comments for "Ex Toto Orbe Romano: Immigration into Roman Dacia: With Prosopographical Observations on the Population of Dacia":