All You Need Is Luck--: How I Got a Record Deal Meeting Paul McCartney by Paul Tennant 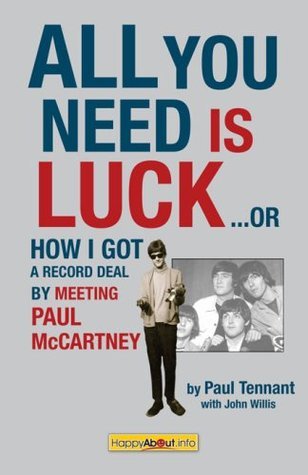 The story talks of my struggle in a working-class family, with my mother suffering from Multiple Sclerosis and how I overcame some pretty hard times to eventually make a record and hit the big time in London.

It’s an inspiration to other young musicians to show that you can get anything, if you really want it badly enough.Liverpool at the height of the Mersey-beat Boom of the early l960s was a fascinating place to be – Imagine the setting – a city decimated by German bombers, just emerging from the austerity and poverty of the l950s with loads of kids who just wanted to make music. Anything was possible in those early, heady days of pop music: everyone was being signed to record labels after the Beatles broke onto the charts.In l967 the Fab Four could do no wrong and were at the top of their profession.

It was The Summer of Love and in my book I describe how I met Paul McCartney in Hyde Park, after a car chase through the streets of London, and with the naïve courage of the young I approached him and persuaded him to help me get me a record deal through the Beatles’ brand new company, Apple. And so then, there I was, right at the heart of it, making music for Apple and being paid for it, staying at John Lennon’s house, borrowing his and George Harrison’s guitars, hanging out with huge stars of the era, meeting tons of girls-- and loving every minute of it!But just when I had it in the palm of my hand…I stupidly let it all slip away.

Comments
Comments for "All You Need Is Luck--: How I Got a Record Deal":